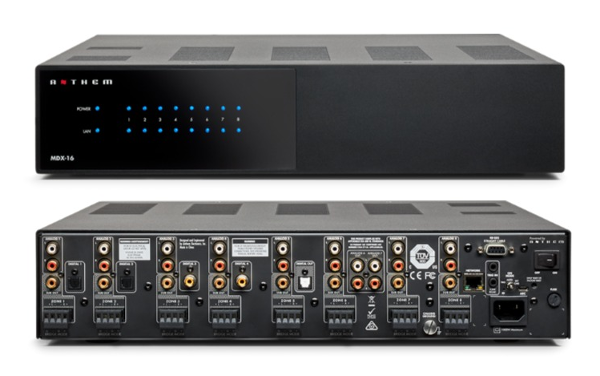 The Web-based MDX Series systems are hailed as the “world’s most advanced” and feature digital signal processing (DSP) running at 32 bits/48 kHz, matrix switching that enables any analog or digital input to be assigned to any output — either pre-configured via a web interface or switched in real-time via IP/RS-232 — 24-bit/192-kHz digital-to-analog conversion, and “Ultra-Class-D” amplification for high power output that’s “efficient and reliable.”

The 16-channel MDX-16 ($2,999) and 8-channel MDX-8 ($1,999) are rack-mountable and rated to deliver 60 watts per channel into 8 ohms with all channels driven and incorporate Advanced Load Monitoring technology for “fast, reliable performance even under the most demanding loads”; channels pairs can be bridged to produce 200 watts into 8 ohms.

Designed to simplify custom audio installations, the MDX systems are equipped with Anthem’s third-generation ARC Genesis room-correction processing for all zones plus separate, zone-specific bass management and subwoofer integration with the ability to set crossover frequency, level, phase, and polarity. Bass, treble, and level controls are also provided for each zone.

Additional features include speaker terminals that accept 12-gauge wire and the ability name for each zone and configure it with multiple inputs for independent playback.

The systems are compatible with home-automation systems from Control4, Crestron, Elan, RTI, Savant, and URC.