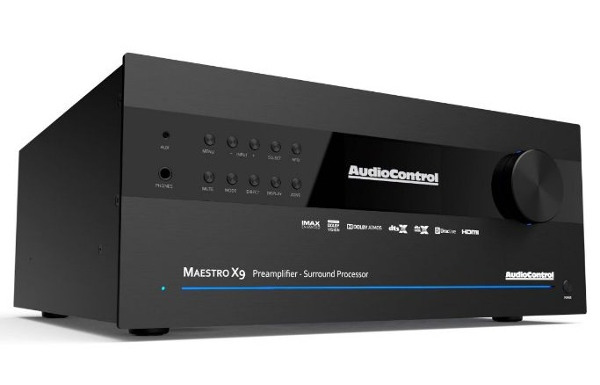 AudioControl today announced that it will unveil three AV receivers and two AV processors at the 2019 CEDIA Expo, which opens tomorrow in Denver.

The new Maestro Series X9 and X7 processors and Concert Series XR-8, XR-6, and XR-4 receivers are slated to ship before the end of the year. Pricing was not announced.

The X8 and X7 both support Google Cast and Apple’s Wi-Fi based Airplay 2 streaming platform in addition to aptX-enabled Bluetooth streaming.

The new Concert Series receivers boast six user-configurable outputs that can be used as height channels or for additional subwoofers and support Dolby Atmos and DTS:X surround processing as well as Dirac Live room correction. The XR-8 and XR-6 bring Auro 3D immersive surround processing into the mix.

The XR-8 can be configured for 9.1.6-channel immersive surround and is built around a high-current Class H amp section rated to deliver 7 x 200 watts into 4 ohms.

The XR-4 supports setups with up to 7.1-channels and has a Class AB amp section rated to deliver 60 watts per channel into 8 ohms.

All of the receivers can be controlled via an app and configured via web-based software in addition to supporting HDMI 2.0b, Google Cast, AirPlay 2, and streaming via aptX/Bluetooth.

All of the new processors and AV receivers sport a new industrial design.