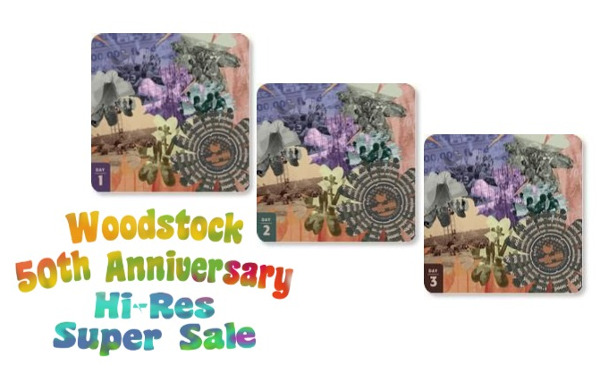 HDtracks, one of the largest digital stores specializing in high-resolution music, is celebrating the 50th anniversary of Woodstock with a “Hi-Res Super Sale” offering discounts on historic live recordings from the iconic 1969 festival.

For the ultimate hi-res experience, HDtracks has announced a $50 discount if you buy all three days of Woodstock 50 – Back To The Garden: The Anniversary Experience, available in 96-kHz/24-bit resolution.

Day 1 ($43.98), recorded August 15, 1969, runs 2 hours and 20 minutes and comprises 39 tracks, including the mellower side of Woodstock with Tim Hardin singing “If I Were A Carpenter” and Melanie performing Bob Dylan’s “Mr. Tambourine Man.”

Day 2 ($87.98), recorded August 16-17, 1969, runs 5 hours and 46 minutes and spans 69 tracks, including Janis Joplin moving rendition of “To Love Somebody,” Sly & The Family Stone’s electrifying medley featuring “Dance To The Music” and “Higher,” and the Who’s scorching performance of “My Generation” complete with the sound of a baby-faced Pete Townshend bashing his Gibson SG on the stage.

The sale also includes 20% off 192-kHz/24-bit and 96-kHz/24-bit live recordings of Creedence Clearwater Revival, Blood, Sweat & Tears, Tim Hardin, Mountain, Joan Baez, Melanie, and Sha Ha plus the compilations Woodstock: Music From The Original Soundtrack And More, Vol. 1 and Woodstock Two. Albums from many who performed at Woodstock are also offered at a discounts of 20-28%. Among them Jimi Hendrix, the Grateful Dead, Johnny Winter, Santana, Janis Joplin, The Who, and more.

Visit hdtracks.com for complete details of all three Woodstock 50 releases and other discounted offerings.

Back to the Garden: ‘Woodstock’ in Theaters Thursday