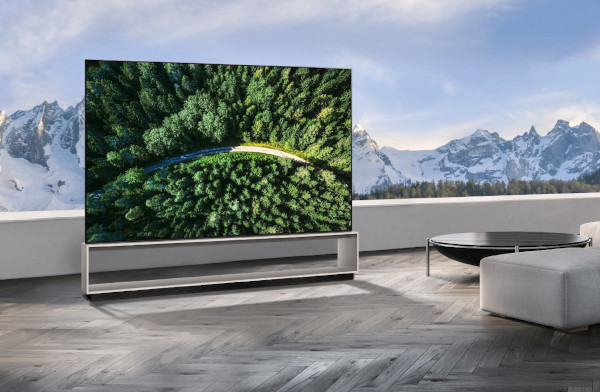 LG has announced plans to begin the worldwide rollout of an 8K OLED TV it says exceeds industry performance standards.

Sporting a minimalist design with a matching brushed-aluminum stand and integrated 80-watt sound system, the 88-inch 88Z9 OLED TV that went on sale in Korea in June will be rolled out alongside LG’s 75-inch 75SM99 8K NanoCell TV starting this month in the U.S., U.K., Australia, Germany, and France.

Pricing was not announced.

Both models deliver 8K Ultra HD resolution (7,680 x 4,320) with 33 million self-emitting pixels, or 16 times the number of pixels in a standard HDTV, and are built around LG’s second-generation α (Alpha) 9 processor, which uses deep learning technology and access to an extensive database to optimize any content before it’s displayed on screen. The processor also analyzes ambient conditions to maintain the “perfect level of screen brightness at all times.”

Upgraded 8K upscaling and improved noise reduction are also incorporated in both models for a “seamless 8K picture” when upconverting content from native 4K or standard HD to 8K.

LG said both TVs surpass the resolution measurement criteria set forth in the Information Display Measurements Standard (IDMS) established by the Society for Information Display’s (SID) International Committee for Display Metrology (ICDM). The standard says stated resolution of a display depends not on only meeting or exceeding a specific number of pixels, but also on whether those pixels can be adequately distinguished from one another in order to deliver the stated resolution.

The ICDM’s Contrast Modulation (CM) measurement quantitatively describes how distinguishable neighboring pixels are from one another, according to LG. For a TV to deliver the resolution indicated by its pixel count, the ICDM requires the minimum CM value to exceed a threshold of 25% for images and 50% for text. An 8K TV with a CM value lower than these values “does not deliver real 8K, even though the TV may in fact have the sufficient number (7,680 x 4,320) of pixels,” LG said, noting that both of its new 8K TVs achieved CM values in the 90% range.

In terms of high dynamic range (HDR), both the OLED and NanoCell models support Dolby Vision and Advanced HDR by Technicolor up to 4K and HLG and HDR10 up to 8K. Both are also WiSA Ready for wireless home theater with uncompressed 16-bit audio on up to 5.1 channels and employ an intelligent algorithm that can up-mix two-channel audio to virtual 5.1 surround sound.