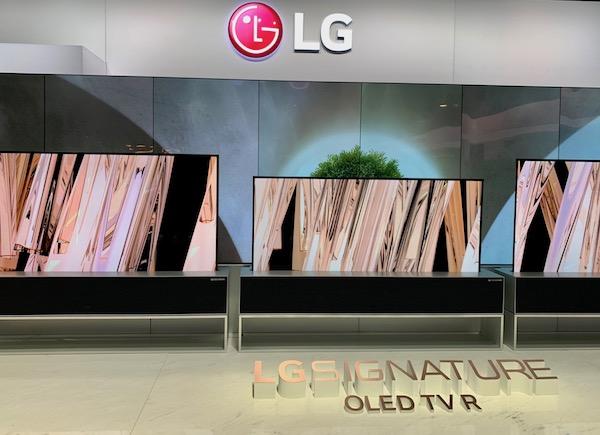 If there’s one TV that really captured the imagination of showgoers at CES 2019, it was LG’s rollup OLED TV — an impossibly thin flexible screen that magically appears and disappears into a svelte aluminum enclosure the company calls Zero View.

Designed to appeal to decor-conscious homeowners who don’t want a big black screen dominating the room, the TV was originally slated for these shores “mid-year” but now appears likely to hit the States next year. Tapping a button on the remote engages a hidden mechanism that slowly unfurls and lifts, ever so majestically, a screen displaying gorgeous 4K images. When the movie’s over and it’s time to go to bed, tap the button again and the TV retracts from view. Oh, and did we mention the 4.2-channel Dolby Atmos sound system built into the box?

The Signature Series R9 OLED TV Al Griffin previewed in January
is a state-of-the-art affair compatible with Dolby Vision high dynamic range (HDR) and featuring LG’s A9 intelligent image processing in addition to Alexa voice control and cool features such as mood lighting and a Line View display mode that shows time and weather alongside whatever you’re watching.

An 88-inch version of this future-is-here TV is still on track for delivery in LG’s homeland of Korea this year, according to recent press reports, but now appears likely to debut here next year, although LG isn’t talking specifics yet.

Multiple screen sizes were demo’d at CES but an LG executive in Korea suggested in a recent interview that anything less than 70 inches probably doesn’t make sense.

In the meantime, which looming TV technology are you ready and waiting for? Leave a comment.