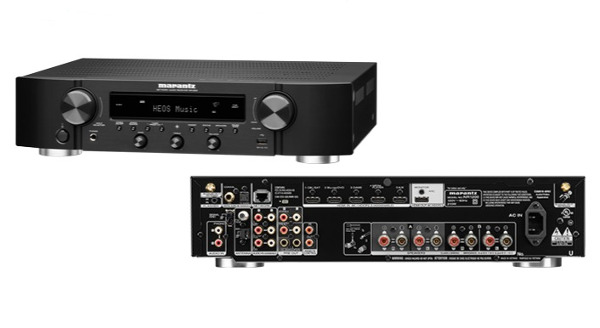 Slated to ship in mid-August, the svelte NR1200 supports ARC (Audio Return Channel) for simplifying audio connections to a TV and boasts a front-panel USB input, a phono input, and five HDMI inputs — each of which supports HDCP 2.3, 4K at 60 Hz, high dynamic range (HDR) and automatically renames itself according to the source selected.

The receiver supports FLAC, ALAC, and WAV formats at resolutions up to 24 bits/192 kHz and DSD streaming up to 5.6 MHz in addition to standard Bluetooth streaming.

App-based multiroom streaming is available via Apple AirPlay 2 and Denon’s HEOS platform, which provides ready access to a number of music services, including Amazon, Spotify (free and premium), Pandora, and Tidal.

The receiver is rated to deliver 75 watts/channel into 8 ohms (with 0.08% THD) from an amplifier featuring discrete left and right channels and custom power capacitors. To further increase channel separation and reduce crosstalk, the transformer is wired independently to the amplifier, preamplifier, tuner, and display.

Voice control via Amazon Alexa, Google Assistant, and Apple Siri are supported when the receiver is paired with compatible products.