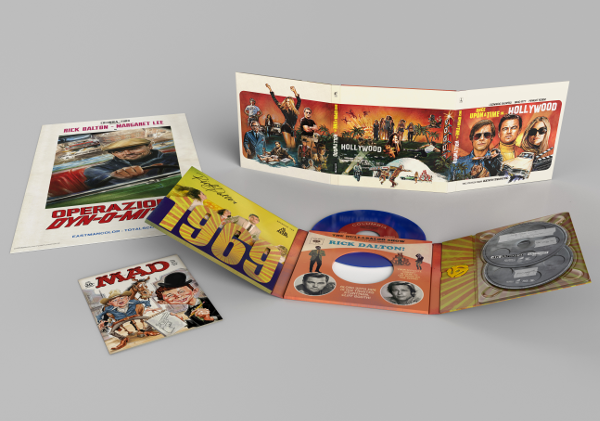 To coincide with today’s release of Once Upon A Time…In Hollywood on 4K Ultra HD Blu-ray, Sony Pictures Home Entertainment has announced that it is accepting orders for a Collector’s Edition box set that includes a 7-inch vinyl record, vintage poster, and a Mad magazine parody inspired by the film.

The Collector’s Edition set, which includes standard and 4K Blu-ray discs plus a digital copy, ships December 24 and can be ordered on amazon.com for $52.99. A standard Blu-ray disc is available now for $22.96 on Amazon and bestbuy.com is selling a SteelBook 4K Blu-ray package for $32.99.

Directed by Quentin Tarantino, the film is set in 1969 in Los Angeles where TV star Rick Dalton (DiCaprio) and his longtime stunt double Cliff Booth (Pitt) make their way around an industry they hardly recognize anymore. Multiple storylines draw on a star-studded cast that includes Margot Robbie as Sharon Tate, Dakota Fanning, Emile Hirsch, Bruce Dern, Al Pacino, and Luke Perry in a tribute to the waning moments of Hollywood’s golden age.

The Collector’s Edition includes than 20 minutes of footage cut from the film and a behind-the-scenes look at the film’s production design, cinematography, costume design, cars, and more.

Once Upon a Time…in Hollywood earned Tarantino the highest-grossing box office opening of his career and has been Certified Fresh by RottenTomatoes.com with an 85% Tomatometer score and 70% Audience Score.

The film’s aspect ratio is 2.39:1 and the 4K disc has a 7.1 DTS-HD Master Audio soundtrack. Runtime is approximately 161 minutes.